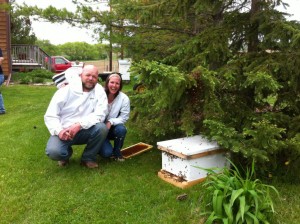 The honey bees gave the Dodge-Jefferson Co. Beekeepers Association a lesson on swarming at their meeting on May 17 at the home of Steve and Robyn Drajeske of Neosho. As members conducted a hive inspection, one of the Drajeske’s bee hives began to swarm out of its existing hive to a nearby tree branch about 30 feet away. Club President Louis Antonioni commented that the swarm “looks like a tornado of bees.” Swarming is the process by which a new honey bee colony is formed when the outgoing queen bee leaves the colony with a large group of worker bees. Swarming is mainly a spring phenomenon and beekeepers often try to “catch a swarm” if they are lucky. The Drajeske’s were able to recover the swarm and re-hive it.  For more information on the Dodge Jefferson Co. Beekeepers, please visit at http://dodge-jeffersonbeekeepers.com.